At Birch you can watch a film in the screening room, take part in a creative workshop, hold meetings or work quietly, enjoy lunch in either of their restaurants, choose from three different bars to sit and sip on a drink, pick up a coffee and the latest copy of Cereal Magazine, take a class or workout in their fitness studios, or jam in their music room; you could even hold a conference there. Birch has got a little bit of everything.

A couple of weeks ago my husband, daughter and I stayed at Birch for the weekend. It rained most of the time that we were there but that didn’t seem to matter. There was something for each of us to do, even stepping out in the light rain at times to explore the extensive grounds.

The first thing you notice when you arrive at Birch is the impressive main house. The Grade II* listed building (previously known as Theobalds House) was once the country home of the Meux family, millionaire brewers in the 19th century. The parties they held were, by all accounts, quite extravagant and those in attendance included King Edward VII and Winston Churchill. Lady Valerie Meux had a controversial past, having been a banjo-playing barmaid and prostitute when she met Sir Henry Meux, whilst working at the Casino de Venise in Holborn. There are stories about her driving herself around London in a high phaeton carriage, drawn by a pair of zebras – the inspiration behind the name of one of the two restaurants at Birch.

The renovations to the building were completed by architects, Red Deer. They took a sustainable approach; reusing, repairing and upcycling; wherever and whenever possible. As they delved beneath old carpets and behind boarded-up fireplaces they discovered beautiful mosaics and ornate details from the Georgian era. White numbers left on the floorboards during previous renovations have been highlighted, rather than hidden away. They took inspiration from the Japanese art of kintsugi, where an object’s flaws are exposed and highlighted in order to celebrate its history and story, whilst prolonging its use. The house has some incredible features which have been consciously accentuated in its new role as an inspirational and creative space.

The bedrooms are pleasantly simple in design and layout. There are no desks or TVs, just a radio in the corner; the rooms at Birch are designed with relaxation and sleep in mind. There are a combination of blackout blinds and raw linen curtains at the windows, incredibly comfortable mattresses on the (slightly lower than average) beds and a pleasant mix of linen and cotton bedlinen. In the bathrooms you’ll find big fluffy towels and essential products.

Each bedroom has a bespoke valet stand, manufactured by Jan Hendzel Studio, combining artwork by local artists. The ceramic vases are by ceramicist Emma Louise Payne (who teaches some of the pottery workshops), the copper bowls are by metalsmith Lucie Naujalis, and the recycled plastic orbs and bases are by sustainable material designer Charlotte Kidger.

Robin Gill (previously of The Dairy) has developed two restaurants at Birch. Valeries is in the main house and offers casual dining and a grab-and-go service. The main dining room is bright, airy and comfortable; with tables of various sizes, suiting both small and large parties. The food is fresh and tasty, tomatoes taste like tomatoes should, spices have been used in just the right quantities to make your mouth water and the sour dough bread comes directly from the ovens in the bakery next door.

Through a large wooden door, at the back of the restaurant, there is a private dining room called The Gun Room; it fits a group of eight perfectly. The wood panelled room is reminiscent of those often found tucked away in trendy East London restaurants.

It is possible to request a picnic or barbecue box from Valeries which you can take out into the grounds behind the main house. There are lots of small areas set-up with hammocks, picnic benches and deckchairs. You can relax around a fire pit, cooking and keeping warm in the colder months (there are also blankets you can borrow).

The second (and also the flagship) restaurant at Birch is The Zebra Riding Club, headed up by Robin Gill and Ben Rand. Here you can enjoy an incredible set menu full of fresh, seasonal produce; some grown on the estate, some from surrounding farms and a few ingredients from further afield. There are alternative menus offered for those who are vegan, pescatarian, or gluten intolerant.

I don’t eat dairy or red meat so I chose the pescatarian menu with a couple of vegan alternatives. My husband had the regular menu and my daughter enjoyed little bits of our food, as well as grilled corn-on-the-cob and a large bowl of freshly made tagliatelle. We all ate particularly well and were looked after exceptionally well by our waitress (who Isabelle took an immediate liking to).

The flavours took us on a journey, tantalising our palettes with everything from courgette tartlets to Irish oysters and razor clams, salt marsh lamb and badger flame beetroots to peach sorbet and rosemary sablés. Everything was cooked to bring out the best in each ingredient, respecting the quality of the produce.

You don’t need to be staying at Birch to eat at The Zebra Riding Club but if you are staying book a table before you arrive to avoid disappointment.

Robin Gill works closely with farmer Tom Morphew – who is responsible for taking care of the grounds and gardens at Birch, including growing fresh produce for both restaurants. Their intention is to grow and rear a large quantity of the produce used in the restaurants, within the grounds.

As part of this grand plan, Morphew has rescued a brood of battery hens. All of them have now discarded the woolly jumpers they wore when they first arrived and almost all of them have managed to grow back their feathers. They now produce eggs for the restaurants which have been included in the current menu at The Zebra Riding Club.

The grounds are beautiful and the time we spent wandering around them with Isabelle, picking up conkers and acorns, and chasing after her, felt like time well spent. I enjoyed showing her the chickens and seeing her reaction.

There are still more developments in the pipeline, Birch intend to evolve the land designated for growing, build a lido and it’s yet to be decided how the huge treehouse on the front lawn will be used.

Our time at Birch was never intended to be about work, although obviously reviewing a hotel does require some work on my part. The facilities available in The Hub offer flexibility for those who prefer a co-working space. There are multiple meeting rooms that can be used as offices and throughout the site there are countless spaces you can hire for events, away-days and team building exercises. In the The Hub you’ll also find the Links Bar and The Store, both of which offer hot drinks, pastries and snacks.

Earl of East are in residency at The Store, offering a small but well-curated shop with books, magazines and a few essentials that you might want or need during your stay.

One of the big attractions for me at Birch, are their creative workshops; there are more than you could singlehandedly take part in, on any given day. At the time of our stay, they included bird box building, macramé plant hanger making, Bauhaus plate painting, glassblowing and candle-making; to name a few. There are also guided walks, and egg gathering sessions with Tom Morphew.

During our stay I took part in two of the workshops. I learnt some pottery basics in the Pottery: Clay Session with Emma Jane Payne which included learning how to coil, pinch and slab build. The three hours I spent in the studio were incredibly meditative and I enjoyed the time spent chatting with the other women in the class. I plan to share more about the workshop in a separate post.

I also took part in a Soda Bread Masterclass in the Interactive Bakery. This was just a one hour class and taught me how simple it is to make soda bread at home. It took 20 minutes to prepare and the same again to bake. It is also possible to drop-in to the bakery throughout the morning and learn how they make their delicious sour dough bread. Each session lasts just 10 minutes and, when put together, take you through the full process.

There were a few children staying whilst we were there but (for the time being) I would say that although Birch have all the essentials covered, it is really best set-up for those in their late twenties and early thirties without children or for a weekend away whilst yours stay with their grandparents. I would happily return and while away a few hours in their restaurants and studios.

Rooms start from £110 for a mid-week stay in a small room. 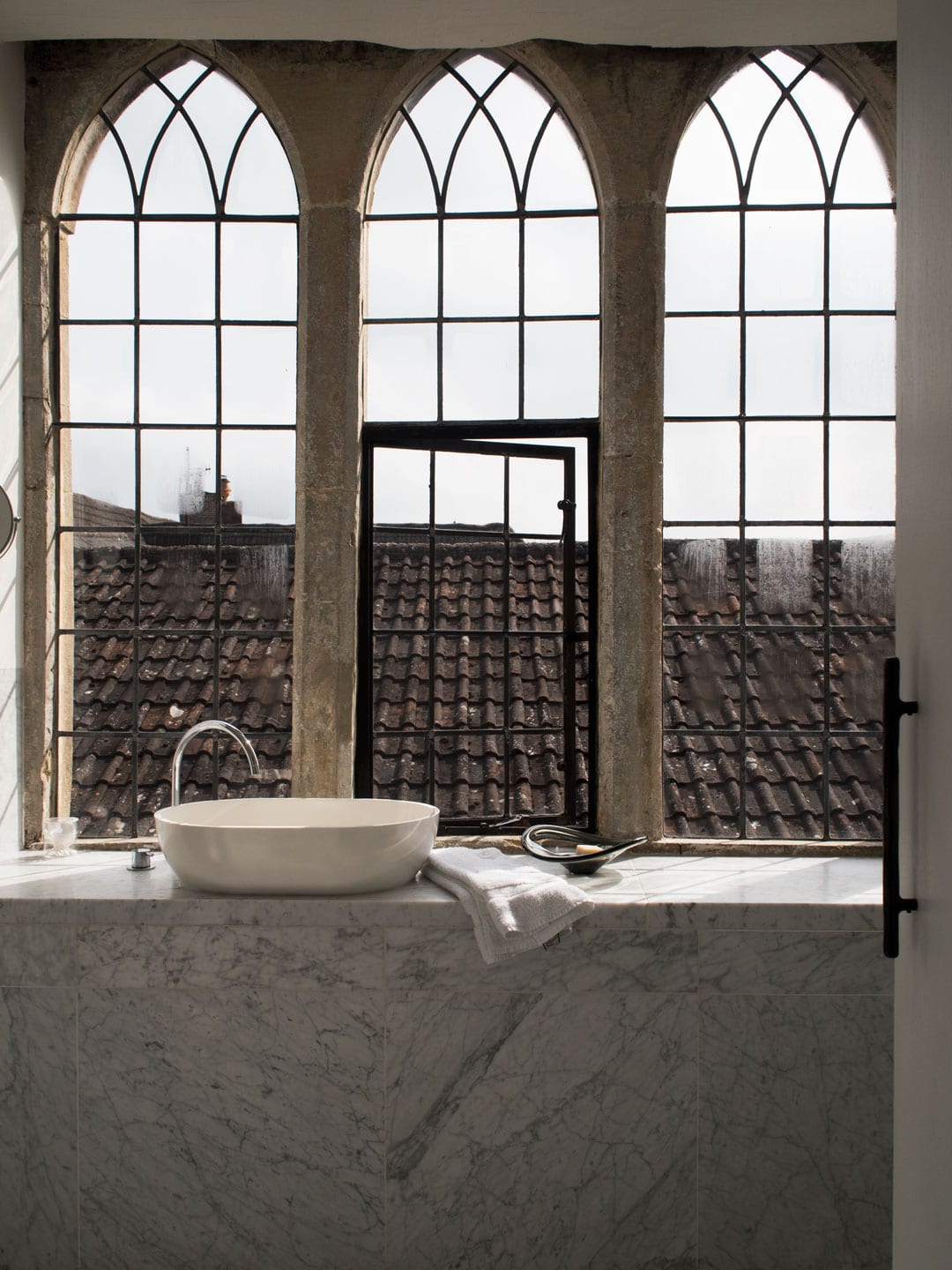 At The Chapel, Bruton